Can Coffee Protect Against Alzheimer’s?

Recent studies have shown that caffeine may protect against cognitive disorders, like Alzheimer’s disease, due to its stimulating effects on the central nervous system. Here, the home care providers at Avila Home Care detail why including a cup of coffee in your daily routine may do more than just help you wake up in the morning.

While most Americans enjoy a cup of coffee or two when they wake up, this morning staple may prove to be more beneficial than merely helping us overcome our morning grogginess—consumption of caffeine found in coffee may work as a preventative measure against Alzheimer’s disease and other neurological conditions. Epidemiological studies published in the National Center for Biotechnology Information (NCBI) focused on the long-term effects of caffeine as a preventative measure against cognitive decline and three out of five studies supported coffee’s positive impact on neurological function and protection. In a study from the Cardiovascular Risk Factors, Aging and Dementia (CAIDE), drinking three to five cups of coffee per day during mid-life was linked to a decreased risk of developing dementia, Alzheimer’s and other cognitive conditions by about 65% during late-life. Ultimately, these studies are just a few of many pointing to the positive role of caffeine in the prevention or delayment of cognitive decline.

Due to the promising results of several studies linking coffee to postponing or preventing Alzheimer’s disease, there has been an increase in research to discover why coffee has such positive effects on protecting the brain. Here are five main benefits of coffee in its role of preventing Alzheimer’s:

The caffeine found in coffee is known to boost brain function, increase awareness and improve energy levels. Therefore, incorporating coffee into your daily routine can help strengthen your brain’s long-term functional capacity and protect against cognitive ailments such as Alzheimer’s disease.

Due to growing research linking similarities between diabetes and cognitive disease, as approximately 70% of type 2 diabetes patients develop Alzheimer’s later in life, some researchers have deemed Alzheimer’s disease “type 3 diabetes.” One study showed that drinking six cups of coffee a day was associated with a 33% lower risk of developing diabetes compared to no coffee consumption. Because Alzheimer’s may be triggered by insulin resistance in the brain in the same fashion as type 2 diabetes, consuming coffee may lower the risk of developing Alzheimer’s disease.

Research performed at the University of California showed that adults who consumed a 200 mg caffeine tablet scored significantly higher on memory tests than those who did not consume a caffeine tablet. Therefore, consumption of caffeine in the form of coffee could help boost memory and protect against the memory-declining characteristics of Alzheimer’s.

Current research supports the anti-inflammatory properties of coffee, and one study showed that adults over age 65 who had higher levels of caffeine in their blood were less likely to develop Alzheimer’s. Regarding the study, Neuroscientist Chuanhai Cao said, “These intriguing results suggest that older adults with mild memory impairment who drink moderate levels of coffee—about three cups a day—will not convert to Alzheimer’s disease or at least will experience a substantial delay before converting to Alzheimer’s.”

Buildup of tau protein, found in the central nervous system, is closely linked to the development of Alzheimer’s disease. However, one study found that, since coffee is an adenosine receptor antagonist, it helps block receptors to the brain that contributes to the buildup of tau protein.

Because cognitive ailments such as dementia and Alzheimer’s disease are serious public health concerns, it is imperative that experts continue to develop new methods of treatment and research potential preventative measures. While there is still much research to be performed, the findings connecting coffee consumption to delayed Alzheimer’s look promising. The home care providers at Avila Home Care are passionate about providing quality care for patients while they age in place and look to research such as this to stay informed about elder care issues. If you would like to speak to a dedicated home care provider at Avila Home Care, contact us today! 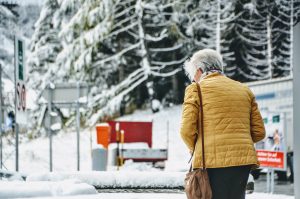 Best Practices to Avoid Slipping and Falling on Ice

As the cold weather arrives this winter, it may become more difficult for seniors to be mobile outdoors. Hazardous conditions such as snow and ice can increase the chance of falls for seniors who venture outside and lead to serious injury. Here, the home care providers at Avila Home Care discuss tips on preventing…

Top COVID-19 Scams for the Elderly to Avoid

Unfortunately, in the midst of a global crisis caused by the novel coronavirus, many scammers have found an opportunity to target the elderly community. The home care professionals at Avila Home Care want you to stay proactive about protecting yourself from hackers, scammers and other threats. Here are a few of the top COVID-19 scams…

The Link Between Menopause and Alzheimer’s: An Overview

It can be startling to hear that, by the age of 65, 1 in 5 women have a chance of developing Alzheimer’s, and menopause is actually a potential link. Here, the home care providers at Avila Home Care discuss the connection between menopause and Alzheimer’s, and how you can take preventative measures to preserve your…