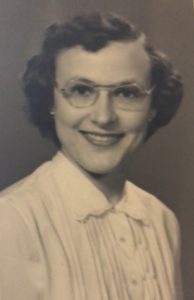 Margaret Sellmayer was born in Baltimore in December of 1929, mere weeks after the infamous American stock market crash. A few days later, she was baptized at Sacred Heart of Jesus church, and given the name Margaret Mary.

Margaret was confirmed in the Catholic faith on December 7th, 1941- Pearl Harbor Day- when she was 12 years old. “It was quite a day with everything going on in the world. My confirmation name was Therese.”

“When the United States entered the war after Pearl Harbor, there was food rationing- hot dogs on Saturday night was a feast! We had to be so frugal.”

Margaret reflects, “Things were different then- the country was united. Our neighborhood was united- people of different races and ethnicities would sit and talk with each other on their front steps. Everyone was very polite and neighborly.”

Bonds with her friends have always been very important to Margaret. Her mother used to say, “Tell me who your friends are, and I’ll tell you what you are.” Margaret believes that “faithful friends are so important- and just simply loving all people.” 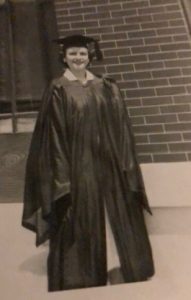 Margaret went to the Institute of Notre Dame from the third grade through high school, where she played violin in the school orchestra.

She says she’s always felt as though “there’s more to life than keeping a house”. Although she had many opportunities, Margaret never married. Her siblings’ children are the children in her life- “I’ve had such a good life”. 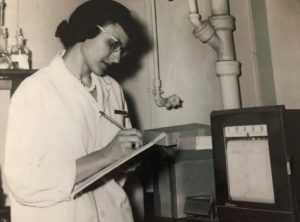 After college, Margaret embarked on a career in the field of chemistry and medicine. She first worked with Dr. Victor McKusick, who went on to become a world famous internist and medical geneticist, and Professor of Medicine at Johns Hopkins Hospital in Baltimore. Dr. McKusick was one of the first proponents of mapping the human genome for use in studying congenital diseases. His wife was also a doctor, and Margaret fondly remembers going to their house to play charades.

While at Hopkins, Margaret did research on Myasthenia Gravis, an autoimmune disorder in which antibodies destroy the communication between nerves and muscles, resulting specifically in weakness of the skeletal muscles.

Margaret went on to a meteoric rise in her profession, working for the Department of Gerontology of the National Institutes of Health (NIH) located at Baltimore City Hospital (which is now Johns Hopkins Bayview).

In her spare time, Margaret loved to go duck pin bowling on Sundays, followed by dancing the waltz, polka, cha cha, rumba, and swing at St. Wenceslaus Hall. “They had a great band there!”

Margaret remained very close with her parents. Her father developed a blood clot when he was in his 60’s, and his leg had to be amputated. Given that he had previously tended to be impatient due to job pressures, Margaret was surprised at his peaceful response to having the amputation when he said, “God gave me that leg and it’s his privilege to take it away.” Following the amputation, Margaret says her father’s whole demeanor changed- he was extremely patient, kind and grateful for all that one did for him. She reflects, “Do you see the hand of God in that?” Her father passed in 1959 at 70 years old.

The 1970’s marked a difficult, yet enlightening decade for Margaret. She lost her brother Louis, who died when he was only 43 years old. Margaret was very sick with pulmonary issues and was unable to work for 1 ½ years, and her mother also needed to go into a nursing home and then passed away. “Despite the hardships, I somehow felt such a sense of peace during that time. My mother’s words helped me tremendously, “When God takes me, it’s going to be hard for you, but I want to leave you with one thing- life goes on, and you must go with it.””

Margaret eventually went to work for the Laboratories Administration of the Maryland State Department of Health as a Clinical Chemist. She was named Assistant Chief of the Division of Clinical Laboratory Services (Clinical Chemistry, Blood and Environmental Lead, Therapeutic and Drug Abuse Monitoring, and Hemoglobin Disorders).

After 42 years of an extraordinary career, Margaret retired in 1994.

“Whatever vocation you have, you need to work hard at it,” Margaret says, “Work is what kept me going through all of the challenges in life- from my health issues, to taking care of my mother and father and eventually losing them.”

Margaret says that she feels the Lord is with her, and often at the end of a day when she’s by herself, she’ll look up and say “So, it’s just you and me now!” 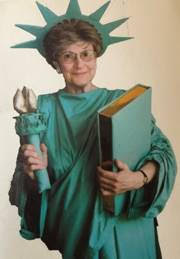 In July of 1997 at 67 years old, Margaret moved to Oak Crest Village Senior Living Community and began a new, very active season of life. She served in the Eucharistic Ministry in the Catholic community at Oak Crest for 15 years, including as Chairperson to welcome new Catholic residents. She also played hand bells, and acted in several plays- Margaret has been a pillar of the Oak Crest community for two and a half decades.

“My roles in the plays have ranged from a hula girl, to the Statue of Liberty- a role for which I became quite well known when the lead organizers of the 4th of July parade at Oak Crest asked me to be the Statue of Liberty in the annual parade- which I did for 22 years.”

“I missed one year of the parade when it was cancelled because of COVID.” For the following year, Margaret said, “No thank you” to being the Statue of Liberty again, because she had begun to use a walker, but they insisted that they wanted only her to play the part, and so they decorated the walker.

Margaret continued with the theme of the Statue of Liberty with cookies in her likeness as favors for her 90th birthday party. Her friend said, “I loved the cookie, but I hated biting your head off- wink, wink!”

Margaret was inducted into the prestigious “Maryland Senior Citizens Hall of Fame” in October 2018 for her volunteering, “making an outstanding contribution to improve the lives of others in their community”.

Margaret’s sister Mary-Therese (who is now 97) and she were both at Oak Crest until the pandemic started in spring of 2020, when they both went to live with Margaret’s niece for a year in Pittsburgh. Margaret came back to Oak Crest, but her sister stayed in Pittsburgh and she misses her terribly. “My sister has said to me, “Margaret, we are blessed with faith.””

During the height of the COVID pandemic, Margaret told a friend “When I die, I’m going to run up to Christ and hug him- I’m gonna kiss him if he lets me when I see him! They don’t have COVID in heaven.” Her friend was a bit surprised, and thought perhaps Margaret should be more reserved when she saw Christ for the first time, and Margaret replied “When you see a friend, don’t you hug them? He’s my best friend.” 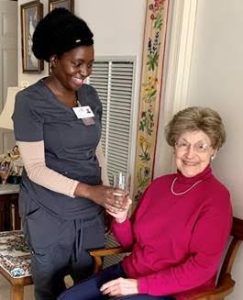 Margaret was introduced to Avila Home Care by her friend and husband who spoke very highly of Avila’s work. Avila’s Founder and CEO, Danny O’Brien, came to visit Margaret in December of 2021. “Danny is delightful- my Avila Caregivers had always spoken so highly of him, so I wanted to meet him.” Margaret loves that they prayed together at the end of his visit with her.

In light of her exceptional career and work ethic, Margaret encourages her Caregivers to pursue careers in nursing by continuing or going back to school- she tells them, “You can do it with hard work!” Margaret is pictured here with Avila Caregiver Beatrice Nguru.

Keeping a Sharp Mind as You Age

As we age, our brain undergoes several changes, and these changes can affect our ability to think critically and recall important information. Fortunately, there are ways to help minimize the impact of these changes. Here, the elder care professionals at Avila Home Care provide tips for maintaining and improving cognitive function as you age. Maintain…

Family and Friend Caregivers’ Health and Wellness in the Baltimore Area

Avila Home Care often receives calls from family and friend caregivers who feel overwhelmed with all their responsibilities. Dedicated to giving the best care to their loved one, they often don’t have time to prioritize taking care of themselves. These caregivers may also be balancing parenting their own children, and/or professional obligations. In this article,…

Having a Safe Holiday Experience with Elderly Loved Ones

The holidays are a time of fun and celebration, but there are some elements of the holidays that may be hazardous to elderly individuals. Here, the homecare professionals at Avila Home Care detail ways to have a safe holiday experience with elderly loved ones. Socialize with Elderly Loved Ones at Their Pace The holidays are…