The youngest of three girls and three boys, Avila Caregiver Bernadette Lowther grew up in Baltimore and attended the Historic St. Paul Community Baptist Church, where she still worships today. “Once the foundation of faith is set, you have it forever.”

Bernadette delighted in attending Sunday school in her youth, and then she went on to teach it. She now ushers three Sundays a month, and one Sunday a month she sings in the choir. Bernadette is the lead on three songs: “God Said It”, “Thank You”, and “Let the Redeemer Lord Say So”. Listen to a clip of Bernadette signing. 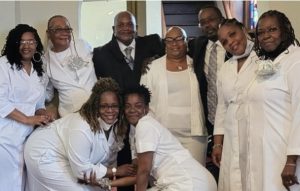 Bernadette admits that as the baby of her family, she was a bit spoiled. “When I was a little girl, I used to sit at the top of the stairs past my bedtime when my family had friends over-  I liked listening to the music and watching them have fun!”

Bernadette has always loved music- everything from Motown and R&B (the Four Tops, Delfonics, and Temptations) to classic rock (Hall & Oates, Stevie Nicks, Elton John, and The Rolling Stones), as well as Gospel music.

“One of my clients likes listening to Fleetwood Mac and she was surprised when I knew all the words! I told her I learned them from my older brothers and sisters.”

Bernadette graduated from Lake Clifton High School in 1986 and worked at Hopkins as a Dietary Assistant, and then as a Unit Secretary for the Johns Hopkins Oncology unit. In 1990, she pivoted careers and began working as a Corrections Officer, and then trained at the police academy to become a Home Detention, Parole, and Probation Officer. She retired from the State of Maryland in 2015 after 25 years of service.

In 2005, using her income tax return, Bernadette had her basement renovated so that she could move into it, and her mother and father could move into the main part of her house. “In 2007 my dad developed Alzheimer’s, and I cared for him until he passed at age 90 in 2010. My mother lived another 10 years and passed in 2020 at age 89.” Bernadette reflects, “Blessings are not always monetary- I was blessed to take care of my mom and dad as they aged.”

Bernadette’s mother and father imparted much wisdom to Bernadette, and she especially remembers one pearl in particular, “Treat people the way you want to be treated.”

Caring for her mother and father inspired Bernadette to take courses at Baltimore City Community College to get her CNA and GNA so that she could work as a Caregiver, in addition to her role at the State. “It’s so sad how elderly people are treated sometimes- I wanted to give back. When I started to care for my dad and mom, I knew it was my calling. It’s a breath of fresh air for me to do for seniors what they can’t do for themselves.”

Fast forward to 2018, Bernadette brought that spirit of service and positivity to Avila Home Care. A friend told Bernadette about Avila, and Danny O’Brien interviewed her. Soon thereafter Bernadette was asked to go to a client’s house who had had a stroke and was diagnosed with Parkinson’s.

“We bonded so much that first day, that they asked me to stay on as their regular Caregiver. Four years later, she’s like a second mother to me- we are very close. Every day I focus on what we can try to improve upon for her quality of life. For example, we practice walking every day and now she’s stable with the walker.” 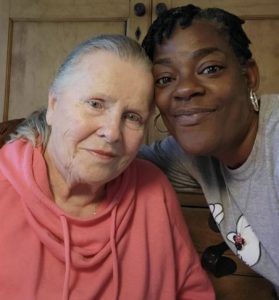 Another of Bernadette’s clients was paralyzed from the waist down in a car accident. “I tell her it’s okay to not feel okay, I tell her to hug me and cry it out and give it all to me. Then we can start our time together.”

Bernadette is inspired by her clients, “I learn so much from the seniors I serve, and I think it also brings them joy to talk about things they did in the past.”

“What’s so special about Avila Home Care is the closeness- between our team members, and also between clients and Caregivers. Avila is always willing to be flexible and helpful.” 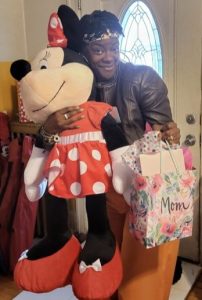 Bernadette is a Minnie Mouse aficionado- from house decorations to clothing to a human-size Minnie that rides in the front passenger seat of her car, Bernadette is smitten with the gleeful mouse. “For my 50th birthday I went to Disneyworld for the third time- that’s my happy place!”

Bernadette also enjoys spending time with her 9 year old niece who lives close by, as well as her 28 year old daughter, who is a Behavioral Counselor at Kennedy Krieger. For the last few years, she’s spent most weekends in Washington, DC with her fiancé, and they are looking forward to a destination wedding in the Caribbean- we can guess who might be a special guest at the ceremony 😊!

The Benefits of Swimming for Senior Health and Wellness

As the weather warms up, swimming not only becomes an extremely attractive option for getting outside and having fun, but provides enormous health benefits for seniors. Here, the homecare experts at Avila detail the reasons why you should put swimming on your list of exercise must-do’s. Just because you’re getting older does not mean you…

Low-Carb, High-Protein Diets: What the Elderly Should Know

Low-carbohydrate diets, such as the ketogenic diet, have become more popular due to claims they may aid in weight loss, improve cholesterol levels, decrease blood pressure and increase energy. In relation to seniors, low-carb diets have also been linked to a decrease in the prevalence or progression of Alzheimer’s disease. Here, the aging-in-place home care…

The coronavirus pandemic has put a profound emphasis on the options for seniors who want to age in place. While the rates of COVID 19 transmissions may be diminishing with the vaccine roll out, home care agencies such as Avila continue to see an increase in the demand for services, which allow seniors to thrive…